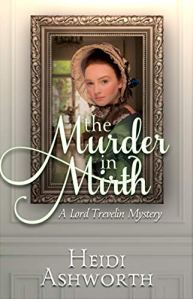 With a reputation as murky as pond water, Lord Trevelin (aka “Trev”) is used to being ignored, insulted, and given the cut direct. It seems like all of London society has swallowed the nefarious rumors spread about by his evil cousin Evelyn. When an invitation arrives for a country house party, Trev accepts it with some misgiving. He has never met his hostess before–what could she possibly want with a pariah like him?

In company with the well-meaning Mrs. S., Trev discovers that his worst nightmares have come true. The entire house party has been orchestrated by Evelyn, and between dealing with the boorish Mr. Chibnall, the disapproving Lord Vane, and the woman whom Evelyn stole from him, Trev discovers that something far beyond humiliation has been planned. Accused of murder, he must investigate the circumstances…while eluding a lynch mob. Will Trev survive to get his own happily ever after, or will Evelyn finally end this game of cat and mouse by swallowing Trev whole?

This book completes the Lord Trevelin Mysteries, pulling together all the threads from the previous two installments. From the very beginning of the book, the tension is palpable. The indignities Trev suffers stain the pages with embarassment, and the horror of what Evelyn is truly capable of permeates the atmosphere. The presence of Jane, now the wife of Evelyn, complicates things for Trev. Is he still in love with her? Did he ever truly love her?

I particularly enjoyed a further acquaintance with Lord Vane, for if you remember the novella “A Gift for Lord Trevelin,” it is Lord Vane’s daughter who will eventually heal Trev’s heart. For the last several years, Trev has known him as one of his cousin’s cronies. But is Lord Vane cut from the same cloth as Evelyn, or is he an honorable man forced into association with Trev’s cousin?

Following the events of the party, we do indeed see into the future and glimpse Trev’s version of his meeting with Sophie. The gift she gives him, of seeing past his scarred face and unwarranted reputation, is all the more singular now that the reader has a fuller understanding of all that Trev has suffered. But knowing what he does about the ill-fated house party, will Lord Vane allow Trev to make Sophie his wife?

Jack, Trev’s bootboy-turned-valet, is a delight as usual and proves invaluable in extricating Trev from his difficulties. The final pages of the book allow us to see Jack as a young man–a young man worthy of starring in a book of his own someday? Mrs. S. is a stalwart defenestrator…er, I mean, defender, despite her malapropisms, and in the end, she does Trev a good turn beyond anything he could have hoped for.

All in all, this is a satisfying conclusion to the Lord Trevelin Mysteries. Recommended.

Disclosure: I received a complimentary copy of this title from the author. All opinions expressed in this review are my own.

Other books in the series: