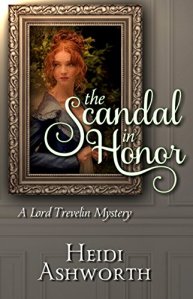 Two years after the fateful duel that left Lord Trevelin’s face permanently scarred, he has finally found a woman who respects and loves him. But Jane Leavitt’s father is still waffling on setting a date for the wedding. Can Trev be trusted to create no more scandals and to stop meddling in inappropriate things like murder investigations?

When Trev hears the sad story of Hannah Andersen, his own memories of disgrace impel him to assist her. Her father is reputed to have committed suicide and her mother has just passed away under strange circumstances. Miss Andersen is afraid she may be the next victim of some unknown villain.

But with Lady Jersey spreading rumors around the ton, it may be all that Trev’s carefully salvaged reputation is worth if he continues to exert himself on Miss Andersen’s behalf. And when his evil cousin Evelyn comes back on the scene, Lord Trevelin must decide if he is willing to put Jane Leavitt through the torments of scandal or if the honorable thing to do is the very dishonorable action of crying off from their engagement.

Like the first book in this series, the greatness of this book hinges on the damaged character of Lord Trevelin. Heidi Ashworth knows how to plumb the depths of despair he feels from his social ostracism, to portray the flutterings of hope he feels in his relationship with Jane, and to create a man simultaneously strong and broken. Although the murder mystery element of the novel left some loose ends hanging and could have been more plausible, the story of Lord Trevelin marched along at a perfect pace, with the grandeur and unquenchable regret of a Greek tragedy.

A host of charming secondary characters complete the cast: Miss Andersen, a conniving debutante who is only too happy to draw on Trev’s account for all her dress bills; Jack, the bootboy-cum-valet who is as faithful as a hound dog; and Mrs. S., a white-haired, walking malapropism of a neighbor, who invades Trev’s house at the oddest times without invitation.

The Scandal in Honor leaves one a little sad, a little wistful, and certainly longing for the next book in Lord Trevelin’s adventures where, one can only hope, the evil cousin will get his comeuppance.

Disclaimer: I received a complimentary review copy of this book from the author. All opinions expressed in this review are my own.