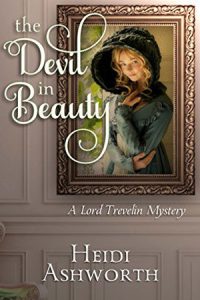 The Devil in Beauty is Heidi Ashworth’s first foray into historical mystery and the first in a series with the Marquis of Trevelin as a detective.

The characters were superbly painted, particularly the protagonist. Lord Trevelin (“Trev”) is a pariah in polite society. Not only did he fight a duel over a married woman, but he also received a horrific scar in the process.  The disfigurement of his face causes stares and discomfort, and the pain of social rejection is poignantly portrayed as Trev struggles to find any mother willing to have her daughter converse with him or any debutante willing to stand up with him at a ball. His desperation to find a friend is another aspect that Ashworth does marvelously, making Lord Trevelin a truly sympathetic protagonist.

Other characters such as the diminutive Seyñor Rey and the capricious virago Lady Vawdrey also come alive from the pages, lending more color to the plot. Historical characters are portrayed as well, such as George Canning (with whom Trev lodges), and deftly woven into the fabric of the story.

The story begins with a murder committed: a fifteen-year-old boy has been stabbed to death and his brother Willy–a man with a disabled arm and leg and limited speech capacity–is presupposed to be guilty of the crime. Trev and Willy have a longstanding friendship, from before either of them incurred their disabilities, and Trev is determined to prove Willy innocent. His far-ranging investigation involves a frightened tutor addicted to something other than teaching, a mysterious secretary-cum-housekeeper with violet eyes, a rash of disappearing females from the nearby workhouse, and a secret gambling ring in one of the neighboring houses.

My one quibble with the story would be that the resolution to the mystery felt a little unrealistic and fantastical (particularly in a story that touched on a lot of emotional truths and that contained so much realism in other aspects). I am very excited, however, to see what the next Lord Trevelin mystery has in store for me…and I particularly want to know what revenge Trev’s cousin Evelyn is plotting for him, as the story of their dealings together continues to unfold.