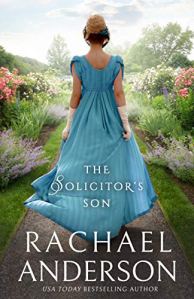 Red-haired Sophia Gifford has never been a great beauty, and now, with her father’s fortune fading away and her third London season unsuccessful, it seems that she will have trouble securing a husband. When her sister Prudence, the new Lady Knave, decides to throw a house party, Sophia is surprised to find that Hugh Quinton is one of the guests. A childhood friend and one of the few people to really understand her, Hugh was the son of her father’s solicitor–before her father dismissed the man and ruined his reputation.

In the intervening years, Hugh has developed quite the reputation for business and is able to offer sound advice on how to save the Giffords’ failing estate. He seems interested in far more things than business where his old friend Sophie is concerned, however, and after a week of walks in the garden, horse rides, and careful confidences, Sophia begins to wonder how she can keep her heart intact. Is it possible that Hugh could have an interest in her. And even if he did, is Sophia’s family willing to let her throw away her social standing to become the wife of a solicitor?

This book is an excellent follow-up to the first book in the Serendipity series. Lord Knave, who was originally Sophia’s intended before he met her younger sister Prudence, is in on the scheme to see his sister-in-law happily settled, seeking out Hugh in London and explaining the situation. Hugh is an excellent hero from the lower classes, a self-made man who feels no inferiority about his station. When one of the neighboring gentry shows interest in Sophia, Hugh gallantly offers to goad him into proposing by paying Sophia attention himself. Embarrassed, Sophia insists that he refrain, afraid of what feelings he will stir up. In the end, it becomes clear that a true gentleman would never ask a lady to give up the life to which she is accustomed, and in the end, it must be the lady who takes that step for herself. This charming story has memorable characters, and although it can stand alone, it’s probably best read in sequence with the rest of the series.