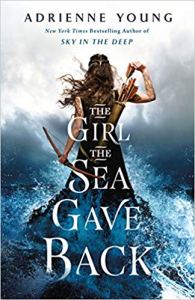 Washed ashore in a half-burned boat, Tova was adopted (enslaved?) into the Svell tribe as a young child. She knows next to nothing about her birth tribe, the Kyrr, or the mysterious black symbols tattooed across her white skin. What she does know, however, is that she has the gift of casting the stones, and her role as TruthTongue is to inform the increasingly hostile Svell chieftain what future the Spinners have ordained. When the Svell make a raid on a neighboring tribe, the Nadhir, Tova feels the guilt of having caused this slaughter and searches desperately for a way to atone.

A young boy during the feud of the Riki and the Aska, Halvard has grown to manhood with the two clans united under their new name, the Nadhir. Doubtful of his own abilities, Halvard finds himself forced by circumstance to take up the mantle of chieftain to lead his people against the huge army of Svell determined to exterminate their villages. When a mysterious Kyrr girl offers her help, Halvard must decide whether to trust her and her gift.

This book is a sequel of sorts to Sky in the Deep, and the events occur ten years after. I truly enjoyed the first book, but this book was really difficult for me to get into. At the beginning, there were so many names and characters introduced all in a clump that I had trouble orienting myself. Throughout the book, Tova’s beliefs seemed to shift back and forth–are the revelations of the Spinners inalterable, or are we the masters of our fate?–which made it difficult to empathize with her guilt over the events that followed the casting of the stones. After all, if fate can be changed, why stress about your predictions causing anything? Halvard’s selection as chieftain of the Nadhir was a little confusing as well–I found myself agreeing with his own assessment of his abilities and bewildered as to why he would have been chosen.

The structure of the book was interesting, with many flashback sections to gradually reveal the history of Tova and Halvard’s lives. While the prose did have some truly luminous sections, there were also portions that dragged interminably, and towards the last third of the book, I found myself skimming portions (which I rarely do). The constant descriptions of violence did little to advance the plot and became fairly wearisome. The cover is this book is absolutely gorgeous, but the book itself didn’t quite live up to my expectations.