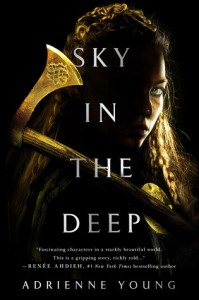 She killed her first man six years ago, and at the age of seventeen, Eelyn is on the cusp of being a full-fledged Aska warrior. But when she catches a glimpse of her brother in battle–the brother that has been thought dead for five years–she sets caution to the wind and ends up being captured by the Aska’s opposing clan, the Riki. As a slave in the home of her enemies, Eelyn experiences kindness from Inge, the clan’s healer, and from Fiske, her new master who protects her from the hatred of the rest of the clan. While there, she must come to terms with her brother’s “betrayal” and in the process come to learn that perhaps the Aska and the Riki are not so different after all.

When a new danger threatens both clans, Eelyn and Fiske must journey across the mountains to propose a truce for the common good. And in the end, Eelyn must decide whether her highest love is her people, or whether Fiske might hold that place in her heart as well.

The prose of this young adult novel was quite lovely, and the characters and the pacing of the story were gripping. In keeping with the portrayal of Vikings on modern television, there was a good deal of graphic violence, some of it perpetrated without remorse by the main characters. The ending of the book felt far more romantic than realistic (given the worldview of the people as described throughout the rest of the book), but it was romantic in a way that made you want to believe.

“I fell asleep to the sound of his breathing, his back rising and falling against me, like the sound of seawater kissing the fjord.”