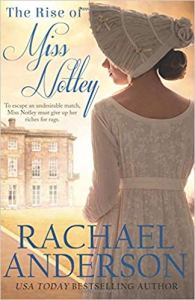 Coralynn Notley wants love, not a titled aristocrat. When her social-climbing father arranges a marriage between her and a detestable old baronet, she flees from home, taking refuge with a kindly couple in the countryside. Determined to earn her own way in life, she applies for the position of housekeeper at a nearby manor house…despite her deplorable lack of experience in all manner of domestic duties.

Jonathan Ludlow is an exacting master. He has let go three housekeepers in the last year, and is adamant about expelling any servant who harbors deceit. Despite Miss Notley’s lack of qualifications, Jonathan is drawn by the honesty in her answers and decides to give her a chance as his new housekeeper. But as his domestic tranquility dissolves and his attraction to Miss Notley grows, Jonathan begins to wonder if perhaps he has made a mistake in hiring her.

This book is the second in the Tanglewood series, following The Fall of Lord Drayson. While Miss Notley was a sweet girl, the details of her circumstances were a little farfetched for a Regency era novel. Her incompetence as a housekeeper reached colossal proportions. (How many times does a woman have to make pastries before she can do it without burning them? Dozens, apparently.) But instead of her incompetence breeding contempt among the under-servants, she managed to endear them all to her with her winning personality. Jonathan is a likable enough sort of character, and I enjoyed his persistence in manufacturing interactions with Miss Notley. He did not have a whole lot of depth to him, however, and I admit that I found myself missing Lord Drayson from the previous book.