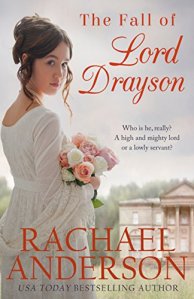 Colin Cavendish, the new Earl of Drayson, intends to sell one of his country estates. Unfortunately, that will mean evicting the vicar’s widow and her daughter Miss Beresford from the Dower House, but after all, it was the earl’s father who had made that foolish promise to let them live there, and the promise was not in writing, was it? When his steward refuses to deliver the eviction notice, the earl does it himself…only to suffer a dangerous fall from his horse twenty minutes later and come to his senses with a temporary case of amnesia.

Lucy Beresford is incensed at the Earl of Drayton. How could he turn her and her mother out of their home with so little notice? When he receives a head injury from a fall during a storm, she begrudgingly drags him to shelter, only to discover that he has no idea who he is. With her mother out of town for two weeks, Lucy develops a devious idea. She informs the bewildered man that he is in fact her servant “Collins” and that he must shine the silver, sweep the chimney, see to the horses…and whatever else she might think of. Taken aback, “Collins” complies with her requests, but even though he cannot remember his own name, he is quite sure he was not a footman or a coachman in his previous life. How else can he explain the fact that he feels quite Miss Beresford’s equal, or the fact that he has absolutely no qualms about kissing her when the opportunity presents itself….

This book was a delight to read. I always enjoy the amnesia trope as a starting point for a story (rather than a deus ex machina that appears part way through the novel). Miss Lucy had just the right amount of presumption and guilt with her deceit. Lord Drayton showed just the right amount of assertiveness and humility. I particularly enjoyed the part where Lord Drayton recovered his memory–and the fact that he decided to keep such knowledge hidden from his fair taskmistress. Recommended.