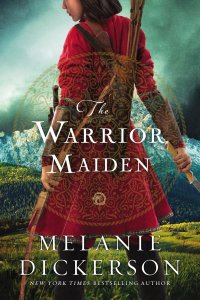 Mulan, a half-Asian girl who can shoot arrows better than any boy, has grown up as a pariah in her village in Lithuania. When her father dies, she must take his place in the army of the local warlord to ensure that her mother is not kicked out of their house. Concealing her identity as a woman, she takes the name Mikolai and fights the Teutonic Knights who are pillaging nearby villages and farms.

Wolfgang wants to be a knight himself, but he’s not going to get his chance in Hagenheim. He joins the forces fighting against the Teutonic Knights, only to find that his rebellious brother Steffan is on the other side of the conflict. When Mikolai the Lithuanian makes a fool of him at an archery contest, he is first angry but then grows a grudging respect and friendship for the boy. But when Mikolai is wounded and Mulan’s secrets are revealed, will their friendship blossom into love?

In this book, Melanie Dickerson goes to a great deal of trouble to depict Mulan as strong and feminine. As usual, she weaves a strong Christian element into the book as both main characters must learn to trust God’s plan for their lives as revealed in the Bible. Considered as a historical fantasy, this works within the world the author has created. Considered as historical fiction, the treatment of medieval religious sensibilities feels anachronistic.

Wolfgang was an interesting character, wrestling with a childhood secret that impacts his relationship to his father and his brother. His concealment causes a canker to grow that he tries to atone for by his own perfect actions so he doesn’t disappoint his father. Mulan, on the other hand, grew up with a harsh and unloving father, which impacts how she relates to God and makes her appreciate Wolfgang’s loving family in Hagenheim all the more. I enjoyed this book in the Hagenheim series a good deal more that the previous installment on Aladdin, mostly because Wolfgang was a much stronger male lead than Aladdin was.

Disclosure: I received a complimentary copy of this book from the publisher via NetGalley. All opinions in this review are my own.