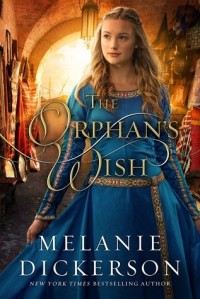 Orphaned at age five in the Holy Land, Aladdin is found by a master thief and forced to steal from market goers. But when he tries to steal from a knight and gets caught, a priest takes pity on the boy, adopts him, and brings him home to the orphanage in Hagenheim. There he grows up in close proximity to the duke’s family, becoming an inseparable friend of the duke’s daughter Kristyn. But as they grow older, their friendship cannot help but change….

Unsure whether Kristyn even cares for him in a romantic way, Aladdin leaves Hagenheim to make his way in the world and earn enough wealth to enable him to win her. His accounting skills and quick wits stand him in good stead, and he becomes partner to a merchant in a nearby city. But when news reaches him that Kirstyn has been kidnapped by a mysterious brigand named Michael, Aladdin must try every possible lead to find his one true love.

This book was a unique retelling of the Aladdin story. I must admit, I was expecting it to stay in the Middle East instead of moving immediately to the German-esque town of Hagenheim, but many of the key elements of the Aladdin story were there, including his little friend Abu, a capricious merchant/sultan, and Aladdin’s uncanny ability to turn a profit in business endeavors (even without a genie to grant wishes). The plot surrounding Kirstyn’s kidnapping had some interesting elements to it, as did the aftermath of her rescue.

I have read a few of the other books in this series, books focusing on Kirstyn’s siblings and their fairy tale romances with other characters. This book was, unfortunately, my least favorite of the bunch. A large part of my dislike for this book lay in Aladdin’s behavior. His character flaw, which is continually spelled out for the reader, is that he tries to be perfect, but cannot be, and in the end, needs to trust in God’s perfection. He is a people-pleaser, never wanting others to be disappointed in him. This gets him into hot water as he practices avoidance instead of facing his duty like a man, and it made him–to my mind–a very unattractive male lead. Although the book described him as tall and handsome, I couldn’t help cringing during the romantic parts, because he was so decidedly un-masculine. While it is normal for YA books to be more straightforward in exposition and narrative style, I would have enjoyed a little more subtlety in the narrative and dialogue.

Fans of fairy tale re-tellings may enjoy this book, but if you are new to Melanie Dickerson, I recommend giving one of her other books a try first.