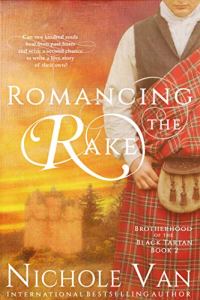 Lady Sophronia “Sophie” Sorrow knows firsthand how despicable rakish behavior is. The product of one of her mother’s many affairs, she does not know who her own biological father is. Her scientific studies of flora and fauna have led her to conclude that the rake is a beast worth staying far, far away from, and there is nobody more rakish in reputation than the notorious Rafe Gilbert.

Lord Rafe Gilbert has a reputation for seduction, a reputation that is more fiction than fact but one that he has carefully cultivated over the years as a defense against his father’s dictates. A chance encounter with Lady Sophie three years ago caused him to lose his heart to the endearing bluestocking, but his father’s implacable vendetta against the Sorrows proved too great a barrier to overcome. Trying to shield his invalid mother from his father’s brutality, Rafe relegates his love for Sophie to the realm of the impossible.

But when Sophie goes searching for her true father and Rafe for a cure for his mother’s melancholy, their paths join in a covert journey to Scotland. There secrets will be revealed that surprise them both and a way to cut the Gordian knot that restrains their love.

This romance had well-written characters and an engaging plot. The almost-Gothic storyline and villainous nature of Rafe’s father made for high stakes, and the twists and turns were unexpected. While some of the dialogue and plot choices did not feel strictly historical, there was enough of a historical millieu swirling around the story to make it feel like a Regency.

Along with the romance between Rafe and Sophie, this book explores further the Brotherhood of the Black Tartan. Rafe meets up with Andrew, the Earl of Hadley from book one of the series, and discovers that they both have been receiving letters from someone who knows about the mutiny and the shipwreck in which their friend Jamie died. Is it possible that the wrecked ship had survivors? And if so, are those survivors friend or foe? While the romance is a happily ever after, the series plot concludes on a bit of a cliff hanger, which means that we’ll all be waiting eagerly for book three in the series to see if Jamie is, in fact, still alive…