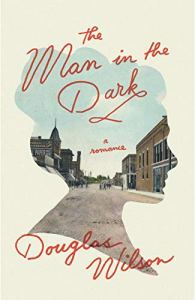 A beautiful young school teacher, Savannah Westmoreland is the perfect catch for any marriageable man in the town of Paradise. But when she turns down the pretentious banker Lambeth once, twice, and even thrice, he decides to make her pay for his humiliation. The new pastor, Thomas Goforth, comes to Savannah’s aid, and it’s soon clear to the whole town that the pastor is sweet on Savannah. But Savannah, as much as she is drawn to the preacher, is afraid that her questionable past precludes matrimony to such a godly man. Schemes and shenanigans pile upon each other until the grand finale, in which Pastor Thomas reveals some secrets of his own…one of which being that he is a more than adequate boxer when the occasion calls for heroics.

This book is a tricky one to assess. Considered as a historical romance, it simply…isn’t. There’s very little historical about the book except for the fact that some people ride on horses instead of in cars and a few references to seminary professors from a hundred years ago. The romance in the book also seems to be less about the relationship between two particular people than about the author’s desire to portray what Romance (with a capital “R”) ought to look like in a Christian setting.

The story is replete with aphorisms, many of which are good and respectable aphorisms, but not the sort of thing you would expect to find cramming the pages of a romance novel.

That said, the plot still kept my attention as the obsessed banker continually upped the ante on crazy, threatening Savannah by burning down her boarding house and then going in for good, old-fashioned murder.

To sum it all up: this book ain’t no Francine Rivers novel…but I don’t think that’s what the author was going for anyway.