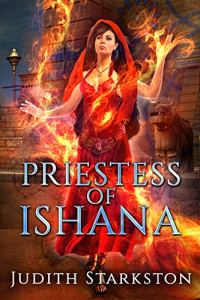 As priestess of Ishana, Tesha must perform the rites that keep the goddess happy with her people, but when a dead man and a burn curse crop up in the nearby cave of demons, Tesha’s abilities are tested to the limit. Is her training and her magic strong enough to control the powers threatening to engulf the city?

Hattu, the brother of the high king of the Hitolian Empire, arrives with offerings for Ishana just as the city dissolves into panic. Accusations of sorcery fly wildly, and before he can mobilize his guards, Hattu finds himself imprisoned. Can he trust Tesha to find a way to set him free, or will he wither away in his dark cell?

Who doesn’t like a good Bronze Age murder mystery? Set in the ancient Hittite Empire in Asia Minor, this book is properly classified as historical fiction with fantastic elements. Inspired by the story of a real Hittite king and queen, the book also brings to life the gods, the horrors, and the rituals of the ancient Hittite religion, painting a world where curses and sorcery are very real.

How many other books about Hittites have you run into? With such a unique cultural setting in this novel, I was very interested to read this Q&A with author Judith Starkston. She describes how her character Tesha is based on a real Hittite woman, Queen Puduhepa, and about the “autobiography” written by her husband Hattusili, one of the rare ancient texts that has survived till today.

With just a few historical landmarks to guide her, Judith Starkston has created wholly original characters that fit seamlessly into their Bronze Age world. Tesha, the daughter of the temple leader Pentip, is a young woman who likes everything in life to be managed and arranged according to straight lines. Although some ascribe her position as priestess to nepotism, she repeatedly demonstrates that she has the intelligence, cunning, and diplomacy to excel.

Hattu is a general and underking to his brother. Originally trained as a priest, he has been forced to learn leadership on the field of battle and intrigue in the halls of the Hitolian court. With his first wife deceased, he has not thought to look for another…until he sees the voluptuous Tesha. Now, enmeshed in political rivalries and carefully-held secrets, Hattu will soon find that Tesha has more to recommend herself to him than just her beauty.

Tesha’s blind sister and Hattu’s resourceful captain of the guard star in the cast of secondary characters, proving just as memorable as the hero and heroine themselves. The setting itself comes alive in vivid color, and the magical elements of the story enhance the world building. The sequel to this book releases soon, and I’m looking forward to spending more time in Hitolia….