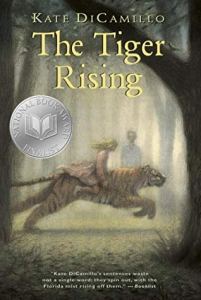 Rob Horton lives in a Florida motel with his father, a father who refuses to speak the name of his dead mother, a father who hit him at the funeral to stop him from crying. The school bullies beat Rob up on the bus every day, A rash on his legs makes him the target of derision. And in the midst of his misery, he tries to squash down all his feelings so that he does not have to admit how desperately unhappy he is.

In the woods behind the hotel Rob encounters a tiger pacing in a cage. Drawn to the majestic beast, he is both intrigued and terrified by the idea of letting it loose from its cage. The same day he finds the tiger, he meets Sistine Bailey, the new girl in town who’s here because her parents are in the process of getting a divorce. Sistine’s anger over the situation is red-hot–she wants to fight the bullies at school, and sometimes, she punches them first. Sistine is the first person that Rob can tell his story too, and when she learns about the tiger, she insists they must open the cage. Rob is still not so sure….

This novella explores the importance of friendship, of sharing our emotions, and of speaking truth so that healing can happen. Every time I read Kate DiCamillo (for example, Louisiana’s Way Home), I am reminded of Flannery O’Connor. There is no sentimentality here surrounding children. DiCamillo’s characters live in a world of pain, sadness, and evil, but, at the same time, it is also a world of goodness, truth, and beauty, a world orchestrated by a benevolent God.

The pictures that DiCamillo paints in the story are heart-rendingly evocative. The tiger rising and getting loose is a symbol for Rob’s emotions, which, as Willie May, the motel maid, tells him, need to rise up to his heart so he can feel them properly. Sistine herself is named after the Sistine Chapel, the picture of God reaching out and touching man. Willie May points out that Rob and Sistine coming together as friends is just something that God would do. William Blake’s poem “Tiger, Tiger” also features in the text, adding a literary sensibility to an already flawlessly written piece of literature.

The simple prose and short length of this book make it readable by ages 8 and above, but because of its themes, it is probably best for ages 11-14. And as is true of all the best children’s books, it is enjoyable to adults as well. Recommended.