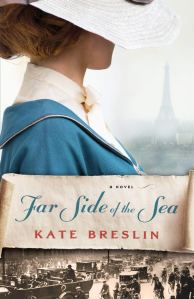 Relegated to a desk job after losing his hand, Colin Mabry spends his days decoding messages sent by carrier pigeon. Strangely enough, one of the messages appears to be for him, a call for help to save Jewel Reyer, a young Frenchwoman who nursed him to health on the front and almost became his sweetheart. Determined to find Jewel, Colin heads to France where he meets up with Jewel’s half-sister Johanna. Impulsive, endearing, and always late to an appointment, Johanna wants nothing more than to be reunited with her father and half-sister. Together, Colin and Johanna assume the identity of a married couple and travel from Paris to Toulouse to Barcelona, trying to free Jewel from the clutches of a German agent before it is too late, and discovering that their own hearts are now entwined in a way that will make separation unbearable.

This World War I love story had beautiful character development. Colin, damaged by the war, suffers horrific nightmares, terror of explosions, and a fear that no woman will love him on account of his mutilated body. His daily struggle to dress and feed himself with only one hand is poignantly displayed along with his bristling embarrassment over his condition. Johanna, haunted by the violence and abandonment of her past in Ireland, accepts Colin as he is with a loving and generous heart. Feeling guilt over her own attachment (as it is just possible that Colin may belong to her sister Jewel), she risks everything to maintain honesty with Colin, knowing that he may reject her when he learns the truth about her past.

The use of carrier pigeons was an important plot point in the book. Even in a time of telephones and telegraphs, these swift feathered friends proved great allies to the Allied cause. The Christian elements in this book felt slightly forced when Colin originally speaks to Johanna about God, but by the end, the message of faith was woven seamlessly into the story. This book is a clean and captivating romance that will appeal to lovers of World War I fiction.