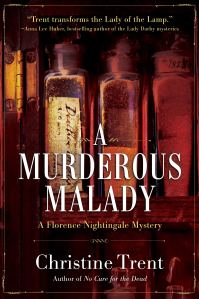 When Florence’s best friend Liz is attacked in her carriage while traveling through the dilapidated neighborhood of Soho, her coachman is killed. Victorian nurse-turned-sleuth Florence Nightingale is enlisted to find out who was involved and why. Liz’s father, a general in the Afghanistan War, seems to be hiding something, and his callous indifference to the domestics speaks little in his favor. On the other hand, Liz’s husband, the minister of war, is equally dodgy about the incident, leading Florence to wonder if some old connections of his might be the reason for the attack.

While investigating events in Soho, Florence comes face to face with a deadly cholera outbreak and is forced to split her time between hospital reform and murder investigation. Is it the miasmas in the air that spread cholera, or could an original new theory about polluted water be correct? In the end, both cholera and murder combine to create a deadly atmosphere, and Florence must solve the mystery in the nick of time before succumbing herself.

The second book in Trent’s Florence Nightingale series (see my review of book #1, No Cure for the Dead), this story continues the tale of the medical crusader who pioneered nursing as a hygienic and respectable field. The radical difference between Florence’s upper class life and the tenements in Soho is emphasized as well as Florence’s bravery in entering the homes of those many would consider “untouchable.” Some of the extra historical info felt like a bit of a rabbit trail, but I appreciated learning more about the cholera epidemic. The ignorance surrounding the deleterious effects of raw sewage is astounding, given that civilizations as old as the Minoans had sewer systems and 19th century London did not. This was an enjoyable mystery that shines a light on the unhealthier side of Victorian London and the varying ways that the upper class treated their more unfortunate neighbors.