Tamara Leigh’s Age of Faith series is set during the reigns of King Stephen and Henry II in England. The first five books chronicle the lives and loves of the five Wulfrith siblings: Garr, Beatrix, Gaenor, Abel, and Everard. The last three books deal with knights connected to the Wulfrith family: Durand, Lothaire, and Elias.

While most of these books are light on the actual history and the romantic storylines are fairly melodramatic, the pacing was so well-done and the series hook so well-fixed that I consumed the entire set within a week.

I’ve already reviewed The Unveiling (Age of Faith #1) on its own, but here is a short review of the rest of the volumes in the series:

THE YIELDING (Age of Faith #2)

Beatrix Wulfrith and her sister are determined to elude the neighboring lord whom the king wants one of them to wed. But when Beatrix is captured by an uncouth knight, a fall from a cliff leads to his death. Swearing vengeance, the knight’s brother, Lord Michael D’Arci, is determined to see Beatrix hang for murder. He hunts her down to bring her to justice, but once they are thrown together in the most dire of circumstances, he begins to doubt whether this sweet-natured, convent-bound girl could have done away with his brother after all.

This was probably my least favorite book of the series. Michael D’Arci was so implacably harsh towards Beatrix that I never really warmed up to him as a hero, even when Beatrix started to see the good in him. The plot of this book is key, however, in setting up the twists and turns that will effect the Wulfrith siblings throughout the rest of the novels.

THE REDEEMING (Age of Faith #3)

Gaenor Wulfrith has been fleeing her fate for far too long. The king’s decree must come to pass, and she must wed the Wulfriths’ ancient enemy, Lord Christian Lavonne. But what the baron does not know is that she has already given her heart and her body to another. What will Christian do when he finds out that his new wife has betrayed him?

The plot of this story was an interesting one. Gaenor, in love with Sir Durand who is in turn in love with her sister Beatrix, allowed herself to be seduced by him in a moment of folly. Swift on the heels of this sin comes her brother’s orders that the marriage with Baron Lavonne take place. Gaenor spends the weeks before the wedding at Wulfen Castle, eaten up guilt and the knowledge that her future husband will despise her. But Christian Lavonne is not the man she fears he is, and, as it turns out, he can forgive as well as he can love. This title was probably my favorite in the Age of Faith series. 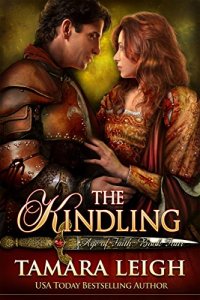 THE KINDLING (Age of Faith #4)

Helene of Tippet is a healer by trade, and unbeknownst to the world, the illegitimate daughter of a nobleman. When Abel Wulfrith nearly loses his life at her brother’s hands, she journeys to be near him, to help him, to heal him. The fiercest of the Wulfrith brothers, Abel has saved Helene’s life once before, but crippled by his injuries, he now feels that he has nothing left to live for. How can he take a wife that his injured swordhand can never protect? And what will he think of Helene when the secret of her parentage is revealed?

Abel was a relatable but frustrating character. Devolving into self-pity after his injury, he needs the quiet grace of Helene to incite him to rise from his sickbed. But at the same time, he needs a different kind of grace to help him forgive the faults of her father and brother instead of visiting them on her own head. Interestingly, Sir Durand comes into this story once again, this time able to redeem himself from his sin with Gaenor, and although Abel wins Helene, the stage is set for Durand to find a bride of his own in a future book. 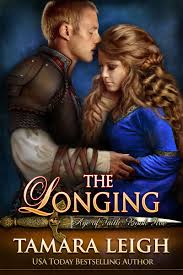 Everard Wulfrith can never forget the woman he once loved, nor the woman who once betrayed them and ripped them apart. But when Lady Susanna de Balliol comes back into his life, seeking sanctuary for his long lost Judith’s son, he cannot deny her. As Everard works to safeguard the boy’s inheritance, he learns that Susanna may not in fact have been as faithless as he assumed, and Susanna learns that even in the darkest hour, hope can reemerge.

This book holds an unusual love story, as the ghost of the departed Judith stands between Susanna and Everard. Forced to fend for herself in a cruel world, Susanna arrives at Wulfen Castle damaged and broken, but determined to do her best by her nephew, whatever the cost to herself. Despising her initially as a traitor and a harlot, Everard finds his mask of indigation beginning to crack when he realizes the cruelty of the life Susanna has had to bear. This book introduces Sir Elias Morville, a troubadour at heart, whose feelings for Susanna must yield to Everard’s, but whose story will be continued in a later book.

Ah, Sir Durand. Always the antagonist, never the hero, Durand finally receives a story of his own. After Helene’s marriage to Abel, Durand swears his sword to Queen Eleanor, going to the continent to serve at the queen’s court. When Eleanor demands that he escort Beata Fauvel, a young and high-spirited widow, back to England, Durand grits his teeth and obeys. Lady Beata has ideas of her own about where her trip should end up, however, and Durand finds that his powers of persuasion and pursuit will be stretched to the limit if he is to carry out his mission.

While Beata was not really my favorite heroine, I enjoyed seeing Durand finally find his own match. Eleanor of Aquitaine figured heavily in this book, adding more of a historical component than other books in the series where the historical characters are simply tapestry on the walls. 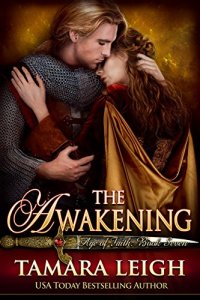 THE AWAKENING (Age of Faith #7)

Everyone knows that Lady Laura Middleton fell prey to seduction in her youth. Formerly engaged to Baron Lothaire Soames, her unexpected pregnancy by another man ended that betrothal most abruptly. Now, ten years later, she must make an advantageous marriage to oblige Queen Eleanor, and Lothaire Soames is the man the queen has chosen. Enticed by Laura’s sizable dowry, the impoverished Lothaire assumes that the only benefit to this obligatory marriage is the funds he’ll be able to pour into his failing estate. After all, who knows whether Laura will cuckold him again? And what is this lie she insists on telling, that she never stopped loving him even though all evidence (including her nine-year-old daughter) stands to the contrary?

This second-chance romance was intriguingly plotted. Lady Laura, overwhelmed by her past circumstances, has not been mentally present enough to guide and train her daughter into virtuous womanhood. She needs to come out of her cocoon and live again, and Lothaire, once he overcomes his pique, is just the man to help her do it. The story also has a Gothic flair to it as an unknown person in Lothaire’s keep attempts to sabotage their relationship with mischief of one kind or another.

THE RAVELING (Age of Faith #8)

When Sir Elias returns to the tavern girl he brokenheartedly left behind, he finds out that he may have fathered a son on her. Honore, a lay sister at a nearby abbey, takes in foundlings, and Elias hopes that she may know what happened to the disfigured lad known as Hart who may or may not be his child. Thus begins an adventure that finds Elias and Honore hurtling across England, the Channel, and into France. While tracking the circus that makes a living exploiting the unusual, they find themselves caught up in the scandal of Archbishop Becket’s defiance against King Henry and caught up in their own dangerous game of stealing back the boy who was stolen from England.

Although Elias and Honore were my least favorite couple in this series, I still enjoyed the rich tapestry of history that this book presents. The troubadour culture of the high Middle Ages, the troupes of entertainers, and of course, the principled Thomas Becket all contributed to the millieu. Elias is a man adrift, filled with the wanderlust and poetic soul of a bard, who is unwilling to assume the responsibility of an eldest son. Honore bears her own scars both internally and externally, refusing to remove the gorget (veil) from the lower half of her face for frear of the world’s judgment. An outcast of society herself, she can see the value in others who are shunned, providing a place and a home for them. Can the two of them, Elias and Honore, make a home for each other?