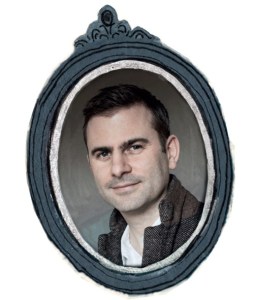 I recently had the privilege of reviewing an advance copy of Cogheart, a middle grade steampunk adventure by Peter Bunzl. (You can read my review here.) The book has been out for a while in the UK, but it released in America on February 12. Today I have Peter Bunzl visiting on my blog to talk about the book, give some writing tips, and tantalize us about what’s next for him.

1. Cogheart was the first children’s book I’ve read in the steampunk genre, and it really captured my imagination! Why do you think steampunk works well for a school-age audience?

PB: Steampunk can feel epic, swashbuckling and exciting. It’s a genre filled with airships, clockwork inventions, steam-powered machines, wonder, marvel, quirky characters, dastardly deeds and daring do. Those are all great ingredients for a children’s novel and that’s why steampunk works so well for young readers.

2. One of my favorite aspects of Cogheart was the pacing. The story was like an automaton that never wound down but just kept ramping up on each successive chapter with a new trick up its sleeve! Do you have any tips for how to create an adventure that keeps crescendoing to the very end?

PB: Thank you! That’s a great description of suspense. It’s not just the story you want to wind up with each succesive chapter it’s also your heroes and the reader!

Everything must feel constantly off balance. End each chapter with an unanswered question that adds mystery and danger. No matter what the characters do they cannot solve their problems. If they do resolve one, throw in another, like feeding a fire.

At the mid-point, or the end of the second act, answer the mystery posed at the very start. Then have that solution make things worse. Have it set off a stack of dominoes that takes you to the very end of the story.

3. How does your work in film and animation influence your writing process?

PB: Film making taught me about story structure and how to tell a story economically and cinematically. There’s a grammar in film in the way you structure a sequence of shots that’s similar to the way you structure clauses and sentences in fiction. I’ve read some great articles on both editing processes that highlight those similarities.

Each shot, or each sentence, should ask a question that’s part-answered and part-added-to by the next one and the next one. And yet each answer also witholds information until you’re ready to reveal it. That’s basically how to create the illusion of a developing story with suspense. It’s when you have the elements in the wrong order that it jars and seems wrong.

4. Your book covers are gorgeous! Did you design them yourself?

PB: Thanks, I absolutely love them and was chuffed to bits when I saw the final versions of each one. I love the dynamism and movement in each of them. They were all designed by Kath Millichope and illustrated by Becca Stadtlander. Together they’ve captured the adventure, excitement and magic of the books spectacularly. I had great fun animating the covers for promotional purposes and you can see that, and other interesting bits and pieces, at cogheart.com.

5. What are the release dates in America for the next two titles in the Cogheart Adventures? And what are you writing now for us to look forward to after the Cogheart books?

PB: The next Cogheart Adventures title Moonlocket will be coming to the US in about six months time, and the third book Skycircus sometime in the first half of next year. As for what I am writing next, if you keep an eye on the the cogheart website, there will be an announcement about that coming very soon!

Thank you so much, Peter, for stopping by! I’m keeping an eye out for Moonlocket and Skycircus when they release in the US, and I’ll definitely be looking out for your announcement on what’s next! Cheers! -Rose