Isadora Delafield is one of the richest heiresses in New York, but her mother will stop at nothing less than a title for her daughter. To avoid the attentions of a lecherous duke twice her age, Izzie flees to the farm country of Pennsylvania and applies for a position as housekeeper on Ian McKenzie’s old farm. Little does she know that a rural housekeeper is expected to have many more skills than the ability to order servants around. What follows is a humorous farce as Izzie learns to wash laundry, cook biscuits, chase off goats, and force four orphan children to take an unwanted bath. Determined to become a competent housekeeper and abandon her entitled upbringing, Izzie finds the joys of small town life and discovers that Ian McKenzie, a rising attorney in the Pittsburgh labor scene, might be just the man for her.

In characteristic Jen Turano fashion, this novel delights in the ridiculous–the tumble down a hill into a pile of soft green leaves that turn out to be poison ivy (twice), the tumble into the lake to save a fearless toddler and drench our main characters’ clothes (thrice), the cow named Buttercup who won’t stay out of the living room (too many times to count), and a young lady maintaining her disguise by concocting a false identity, wearing the ugliest spectacles imaginable, and taking obscenely large mouthfuls of cake.

If you’re in the mood for a lighthearted laugh, check out this Gilded Age novel, the first in Turano’s new series, American Heiresses.

Disclosure: I received a complimentary review copy of this book from the publisher via Netgalley. All opinions expressed in this review are my own. 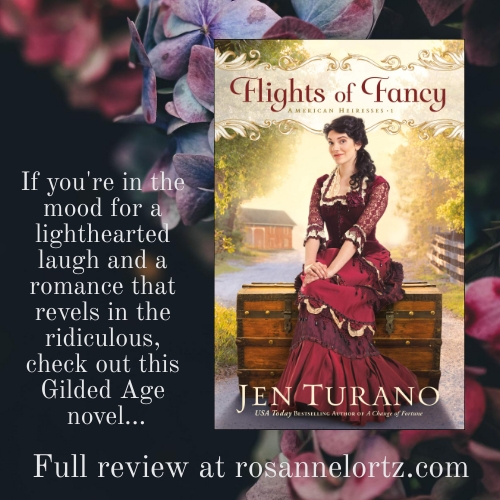