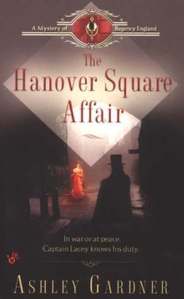 Injured and dismissed from his regiment with half pay, Captain Gabriel Lacey is trying to eke out a tolerable life in London. When he comes to the rescue of an old gentleman beating on the door of a fancy townhouse, he learns that the man’s daughter was mysteriously abducted two months prior. With the aid of his well-to-do society friend Lord Grenville, Lacey begins an investigation that unearths murder, conspiracy, and a sinister man with the ability to influence the highest eschelons of society.

This book reminded me a good deal of Anne Perry’s Victorian murder mysteries, albeit set at an earlier period in history. Unlike the fairy tale world of a Regency romance, this book deals with the harsh realities facing Napoleonic war veterans and the lurid circumstances of sex trafficking in Regency London. Captain Lacey has his own demons, being frequently plunged into melancholia and overcome with rage when he encounters injustice. His friendship with Louisa Brandon, wife of his former superior, is an enigmatic one and the story gradually unfolds over the course of the book. Throughout the story, we learn that Lacey has a stringent code of honor–although not one that everyone might agree with. This book was a fast-paced page turner with memorable characters, and I am interested to read the next book in the series.