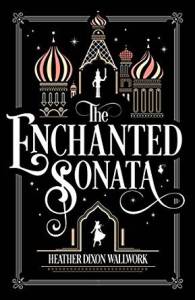 Clara Stahlbaum has been practicing her Johann Kahler Sonata for two years. On Christmas Day she will play it at the concert hall, attract the attention of handsome pianist Johann Kahler, and finally have her happily ever after. But when a strange Nutcracker shows up on her piano, she finds herself whisked away to the fantastical country of Imperia where the children have all been turned into toys by an evil magician. Clara’s gift of music is the only thing that can save the country–and the Nutcracker prince–but will she get home in time to play her sonata for Johann?

Prince Nikolai Volkonsky is more capable than everyone thinks he is. The common people think he’s a pancake-head and General Drosselmeyer (Regent of Imperia since his father’s death) won’t give him any responsibilities.  When the spite of an evil magician turns Nikolai into a walking, talking Nutcracker weeks before his coronation, he must prove that he can avert the crisis and be a true Emperor of Imperia. With the help of a beautiful visitor named Clara, he must stop the rat army’s invasion, defeat the magician, save the children, and convince Clara that her heart would be cherished better by a Nutcracker Prince than by an ambitious concert pianist.

This story brings together the plot of the Nutcracker with the Pied Piper folk tale. The Mouse King of the original becomes a vengeful magician named Erik Zolokov with an interesting backstory of his own. Clara and Nikolai are utterly delightful, and the book has humorous bits both for those who know the Nutrcracker story and those who don’t. The magical power of music is explored as Zolokov’s flute and Clara’s piano-playing continually transmute characters into other shapes, teleport them from place to place, and reveal the truth about ourselves that we refuse to admit. The author is clearly a musician as well as a wordsmith, and the musical terms that sprinkle the page are as much a treat as Polichinelles’ chocolates. While this book is listed as young adult, it could also be enjoyed by middle grade students. Recommended.

Nikolai lowered his sword. He closed his eyes, inhaled slowly, then opened them. “The children,” he said. “And the soldiers. If I let you turn me into a toy, will you turn them back?”