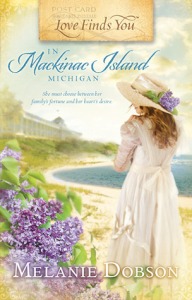 Elena Bissette needs to marry well this summer. Her father’s Chicago factory is about to be foreclosed on, and this could possibly be their last summer spent in high society at Mackinac Island, Michigan. When rumor has it that wealthy Chester Darrington will be making an appearance at the Grand Hotel, Elena’s mother relentlessly schemes to match him up with her daughter. But Mr. Darrington is more interested in financing innovations and inventions than in settling down, and nothing sends him running for the hills faster than a debutante setting her cap for him.

Dismayed by her mother’s insistence, Elena slips away in the evenings and retreats to an old lighthouse where she has spent many of her teenage years sketching in solitude and enjoying God’s creation. Having woefully acquiesced to her destiny of a loveless marriage, she runs into a stranger there named “Chase” who carries a telescope and a love for the stars that equals her own. Smitten by his curiosity and charisma, Elena continues to avoid her inevitable introduction to the much-touted Mr. Darrington, and begins to wonder if a romantic marriage (albeit with someone outside her class) might be possible for her after all.

This sweet romance glistened with the sparkle of the Gilded Age. Elena was a sympathetic, although somewhat stereotypical, heroine. The hero, with his strong work ethic and inquiring mind, was a good fit for Elena, but the misunderstandings between them seemed rather petty and contrived. I enjoyed the subplot involving Elena’s maid and her best friend Parker.

Interwoven into the story were entries from a diary written during the war of 1812. Elena and Chase find the diary in the lighthouse and try to find out the real ending of the story. This extra layer did not capture me as much as the romantic plot, and I found myself skimming every time a diary entry surfaced.

All in all, this was a simple and satisfying weekend read without a whole lot of depth to the story or characters.