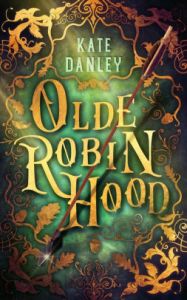 Kate Danley’s newest story delves into the oldest tales of Robin Hood and strings them together in a fast-paced and convincing novel. When the Sheriff of Nottingham murders Robin’s father and burns down their farm, Robin is forced into exile in Sherwood Forest. There he joins forces with John Little, a large fellow trying to escape being pressed into service in the Sheriff’s soldiery. They develop an honorable code, where they will only steal from liars (men who claim to have no money on them) and where they will feast their victims in the forest and send them on their way instead of killing them. As the Sheriff’s rage at Robin mounts, our hero manages to save a goodly knight named Sir Richard of Lea, perform a similar office for the knight’s lovely niece Marian, and endear himself to the poor folk all around the town of Nottingham. But when the Sheriff captures Little John and Maid Marian, Robin must use his wits to save both before it is too late.

Having grown up on the tales of Howard Pyle, this story seemed very familiar to me. One of Kate Danley’s innovations is to have Robin blame his trials on the Christian God of the greedy abbots and go back to believing in “the old gods” of the forest. But since “A Gest of Robyn Hode,” one of the earliest ballads, mentions Robin’s devotion to the Virgin Mary, I’m curious what source Danley has for this or whether it is mere speculation. Chaucer and others during the time period of the “Gest” had a robust criticism of the “fat cat” churchmen of their time but did not renounce faith in the Christian God because of this. Another interesting item is that Danley also places Robin’s reign in Sherwood during the reign of Henry III (the son of the nefarious King John that Robin is usually associated with). The king himself does not appear in the story, although Guy of Gisborne has a major (and sinister) role in the tale.

All in all, this book was a good weekend read although not the most memorable of the Robin Hood canon and not one I would likely return to.