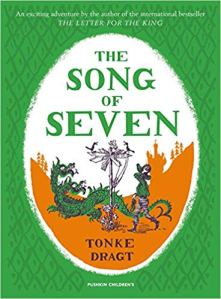 School teacher Frans van der Steg amuses the children in his classroom with adventure stories about Frans the Red, but he never imagined that he would find himself in the middle of his own adventure story. Shortly after arriving in the quiet village, he receives a letter from a mysterious Count Gradus Grisenstein asking him to tutor his nephew Geert-Jan. But before he can meet the Count, Frans finds himself finagled into a conspiracy including two old spinsters, a magician, a motorcycle punk, and a coachman. They are convinced that Geert-Jan’s life is in danger–and once he finds the hidden treasure in the House of Stairs, his uncle will do away with him. Guided by the prophecy in a sealed scroll and a children’s rhyme known as the Song of Seven, Frans must make head and tails of all the strange events surrounding him, becoming the hero of a story just as marvelous as the ones he tells his students.

This book was an unpredictable adventure that reminded me of The Phantom Tollbooth crossed with The Legend of Sleepy Hollow crossed with A Series of Unfortunate Events. Frans (and the reader) is in a state of cynical bewilderment for the majority of the tale. Is the treasure actually real? Are the conspirators just a bunch of crackpots? Although I did not find it as compelling as Tonke Dragt’s other books, it was an amusing story with clever wordplay and a decidedly Dutch flavor to the people and places.