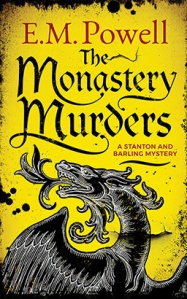 Stanton and Barling are back, this time to solve a murder at a monastery where undefined animosities simmer under the surface.

After Cuthbert doesn’t ring the bell to wake his fellow monks for divine offices, they find him gruesomely murdered in the grate of the kitchen fireplace. Much to Stanton’s dismay, the king’s men are pulled away from the Christmas festivities in London to solve the mystery at this isolated cloister in Yorkshire. Although the abbot protests that all of his flock is innocent, both Stanton and Barling can sense that something is rotten in Denmark. As they uncover bitterness and jealousies among the monks and lay brothers, the killer resurfaces to find victim after victim. Can Stanton’s shrewdness and Barling’s logic find the solution in time before they themselves fall victim in the monastery murders?

This book was another fast-paced read from E.M. Powell. Both characters share more about their past lives, with Stanton pining for his lost love Rosamund and Barling trying to forget his youthful days in Paris. The relationship between our two sleuths deepens as one must fight against the clock to save the other when the killer strikes close to home.

As suspicions grow that the murders might be following a pattern outlined in an ancient text, one can’t help but compare the book to Umberto Eco’s The Name of the Rose. The books are markedly different in other aspects, however, as Powell is writing a thriller, and Eco’s book is…something else entirely.

One of the things I appreciate about Powell’s books is the way she can blend crisp, understandable, modern-feeling dialogue with accuracy to the medieval period. She omits the “ayes” and “nays” of older-style language, allowing us to comprehend the characters without effort. But at the same time, when a red-blooded medieval man goes to a bear baiting, instead of launching an animal-rights campaign to have the poor animal released, he is truly a man of his time with his blood fired up, enjoying the ferocity of the spectacle. One area that I did feel smacked of modern sensibilities and current cultural agenda was the style of Barling’s revelation at the end of the book.

In sum, this book was a page-turning read, a little gorier than the last one in the series, and I recommend it for those not of faint heart or frail constitution. And as an aside, this may be my favorite medieval book cover ever–I love the fonts, and the image, and everything about it.

Full Disclosure: I received a complimentary copy of this book from the author via Netgalley. All opinions expressed in this review are my own.