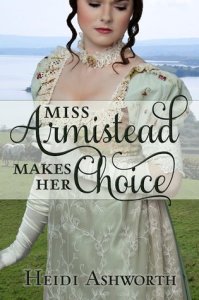 Mr. Colin Lloyd-Jones has sworn off the London season and ladies in general. After crying off from his unfaithful fiancee, he is in dire need of avoiding any fresh heartbreak. But when the breathtakingly beautiful Elizabeth Armistead knocks on his door after a carriage mishap, his best laid plans come to naught. With the assistance of his matchmaking younger sister, Colin contrives to further his acquaintance with the green-eyed beauty. But although Miss Armistead’s sweet nature is as captivating as her smile, Colin soon discovers that the very qualities which attract him to her are the things which must keep them apart….

Miss Elizabeth Armistead has returned from India to marry her soldier fiance, Duncan Cruikshank. Duncan, unfortunately, happens to have lost his eyesight in a sad accident–but to Elizabeth, this can only mean that he loves her for who she is and not for her striking good looks. But when circumstance repeatedly throws her into Mr. Colin Lloyd-Jones, Elizabeth begins to experience misgivings. Is what she feels for Duncan really love? Or is it someone else entirely who has captured her confusing heart?

If you like Georgette Heyer novels, you will love this book. Colin had just the right blend of manliness and attention to fashion to make the perfect Regency gentleman. Elizabeth was sensible and considerate, afraid to be judged as just a pretty face when there was so much more she had to offer. The romance between the two was sweet and satisfying, and as the story reaches its climax, Colin proves every bit the hero that the reader wants him to be. In typical Ashworth fashion, the novel was full of laugh out loud humor with Elizabeth’s predatory friend Miss Hale, who takes an interest in Colin that is decidedly one-sided.

An added bonus to this novel is that the story is set in the world of Miss Delacourt. Colin is best friends with Anthony, prior to the latter’s marriage to Ginny. We get to see, from a distance, Ginny’s disgrace at the London ball and then Anthony’s forced departure to the countryside as Aunt Regina demands that he woo Ginny as his bride. This adds a delightful layer to the story, as do the mentions of Lord Trevelin, from Heidi Ashworth’s Lord Trevelin Mysteries.