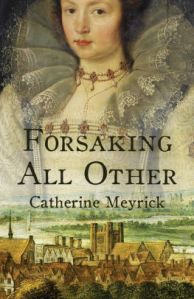 Bess Stoughton had the misfortune to marry a man who didn’t love her. Now that she is a young widow, she is content to remain a lady-in-waiting to Lady Allingbourne, but her father has other plans. When he arranges a second marriage for her, to a filthy and lecherous old man who will provide a good dowry, Bess balks at obedience and makes her escape. Furious, her father grudgingly agrees to give her one year to make a better match.

Edmund Wyard is a wealthy landowner and a soldier through and through. The scars on his pockmarked face mirror the scars on his soul from the nightmarish experiences of his campaign in Ireland. His mother, Lady Wyard, is determined to get him married to a young, biddable girl named Lucy Torrington, but Edmund wants a wife he can converse with–a woman of equal mind.

When Bess’ friend Philippa becomes betrothed and later married, Bess and Edmund are thrown into each other’s company. As Bess tries to facilitate the relationship between Edmund and Lucy, she discovers that Edmund’s hard edges conceal a kind and gallant spirit. Edmund, also, becomes increasingly intrigued by the thought of a woman who is sensible, virtuous, and attractive.

But can marriage be based solely on romantic love? Parental opposition, Bess’ lack of a fortune, a war on the continent, and the English terror of a Papist plot all conspire to come between the two, threatening to leave them both utterly forsaken of all they hold dear.

This book was a delightful look at Tudor/Elizabethan life not centered around the royal court. Rather than highlighting one of Henry VIII’s wives or Queen Elizabeth herself, it focuses on fictional characters against a historical background. The theme of choice is explored many times in the book. It is a world where men get to choose; women don’t. But in a larger sense, it is a world where parents choose, and children’s duty is to obey. Is it even possible to leave father and mother and, forsaking all other, cleave only to one’s true love?

The beautiful cover for this book is what initially caught my eye, but I enjoyed the historical language used in this book and befriended the characters immediately. I recommend Forsaking All Other for anyone brave enough to step off the beaten path in the Tudor/Elizabethan world of stories. You won’t regret it.