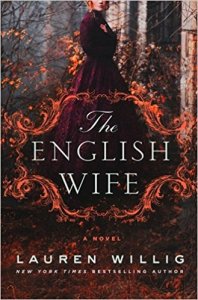 The place is New York, the time is just before the turn of the 19th century, and the crime is the murder of Society favorite Bayard van Duyvil and disappearance of his wife Annabelle. When Bay brought Annabelle over from England five years ago, they seemed to have a fairy tale romance, but now ugly rumors are surfacing about their marriage. The missing Annabelle is accused of being a fortune hunter, an impostor, an adulteress, and a murderess.

Shocked by the newspapers, Janie van Duyvil, Bay’s subdued little sister, decides to defy her formidable mother and unravel the truth of the matter. She enlists the help of James Burke, a newspaper reporter with secrets of his own. Amid a web of disguises and deceit, Janie will find the pivotal clue to prove just who stabbed her brother on the night of the Twelfth Night ball.

This book was a page turner from the very beginning. The twin story lines–the gradual unfolding of Annabelle and Bay’s relationship beginning in 1894 and Janie’s investigation in 1899–were both of equal interest. The dialogue was tremendous; a rapid banter of quotations from Shakespeare, Tennyson, Oscar Wilde, et al. set the tone of high society in the Gilded Age perfectly. The way the story of Shakespeare’s Twelfth Night surfaced again and again in the book (and the way the author worked in The Prisoner of Zenda!) made the story line of disguised identity and disguised desires all the more rich.

My one complaint would be that the first two-thirds of the book were more satisfactory than the last third, and the grand finale waxed very melodramatic, making it less of a literary novel at its close. The mystery was very well done, however, and I recommend this book to anyone who likes a well-written Gothic novel.