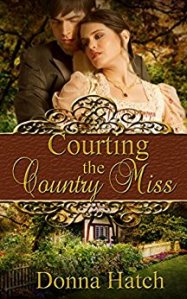 The story opens with Leticia (“Tish”) heartbroken. Richard, the man she had always assumed she would marry, is now married to another, and it all his brother Tristan’s fault.  Fortunately, she has made friends with Richard’s new wife Elizabeth and the two of them are planning to start a charity school for poor girls to teach them enough skills to rise in the world.

Tristan is a charmer, a rake, and Leticia’s best friend. Feeling guilty for having destroyed Tish’s happiness, Tristan comes up with a wager–he’ll find Tish a husband by Christmas…or donate a hundred pounds to her charity school venture. He sets to work finding a pool of suitable suitors (sensible, kind…and monogamous) among the high-ranking nobles of the ton and sends them in Tish’s direction. But when he finds himself inexplicably jealous of every man he introduces to her, he is forced to reevaluate his priorities. Could he ever prevail on Leticia to be more than just his friend, or will his past disqualify him from finding true love with the only one who understands him perfectly?

This book had a sweet, if somewhat predictable, story. Out of all the characters, Tristan Barrett was the star from beginning to end. His charm was undeniable and his story kept the pages turning. I haven’t read the first book in this series yet, but I’m intrigued by the part he plays in that, and I might need to go backwards to get the whole story.

One thing I thought could be improved in this book was a gradual unfolding of the main characters’ motivations, rather than just telling them upfront in the beginning chapter. I also found it slightly incredible how many times Tristan and Tish ignored propriety by going off together by themselves (given the social repercussions that followed this kind of behavior in the previous book).

All in all, it was a relaxing read for a lazy afternoon. I’ll be keeping an eye out for other books by Donna Hatch.