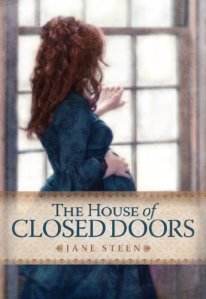 By chance, the two historical novels I read this week were set within a decade of each other. They also proved an interesting contrast to each other, with one being a dyed-in-the-wool Christian romance, while the other gave merely a few pivotal references to an Almighty hand at work in the story. I think you can tell from my reviews which had the greater impact on me.

The House of Closed Doors by Jane Steen is a romance/mystery set in a small town near Chicago post-Civil War. The book opens with seventeen-year-old Nell Lillington’s family discovering that she is pregnant. She refuses to name the father since she does not wish to be forced into marrying him, wishing instead for a life of independence and adventure. Her stepfather Hiram, concerned with the scandal that beset the family, arranges to send Nell to a Poor Farm which houses both “moral imbeciles” like herself and actual imbeciles.

Initially, Nell agrees to the plan to give her baby up for adoption once it is born, but the discovery of mysterious events  at the Poor Farm following her daughter’s birth lead her to realize just how precious her child is to her. She soon realizes that if she is to keep Sarah, she will have to enlist the help of her friend Martin and navigate a dangerous course that brings her far too close to the man she suspects of murder…

The character of the narrator Nell was deftly portrayed in this story. Her “voice” completely immersed me in the story, and Steen’s spare but evocative writing carried me along like a river current. While the author avoided lush description, the ambiance of the small-town midwest, as well as the hopes and dreams of the people living after the Civil War, shone through brightly.

The title of the book is very apropos. Nell lives in a house of closed doors, governed by a stepfather who sees her as nothing more than a pawn to be married off in a way that will promote the reputation of the family. She lives in a society of closed doors, where a woman of her station is only expected to marry and bear children, rather than being able to serve or create in any other way. The frustration Nell expresses with her circumstances has a ring of modern-day feminism to it, but one must remember that that movement had roots in history, roots that lie even further back than the 1860s, and there were doubtless many women of this time period who were as discontent with their “lot” as Nell Lillington.

The religious element, although it did not figure frequently in the book, was powerful, with a subtlety wholly lacking in a more “Christian” novel. At one point, Nell’s friend Martin, not a religious man, speaks of how much happiness the baby has brought to Nell’s mother. “It’s strange, isn’t it? The greatest gift you could have given her stemmed from your disgrace. It’s enough to make me start going to church.” Later, when Nell is saved from an attacker when he slips and hits his head, she says, “I closed my eyes, and for the first time in my life, I believed in a providential God…a God of justice.”

I highly recommend this book with its unusual setting and intriguing storyline. It is the first in a trilogy of books following Nell Lillington’s adventures in the mid-West near the burgeoning city of Chicago.