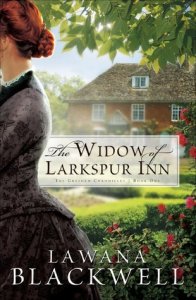 This is a perplexing review to write. The Widow of Larkspur Inn contained some things I really dislike in historical fiction, but all in all, I still enjoyed the book–no doubt a testament to Lawana Blackwell’s excellent storytelling.

Three weeks after Julia Hollis’ husband has died, she discovers that his hitherto unknown gambling addiction has left the family penniless. The only asset left to her and her three children is a rundown inn in the village of Gresham. Under the advisement of her former butler, she decides to make it into a lodging house as a way to support herself.

Julia’s children Philip, Aleda, and Grace discover that although life in the country is far different than their previous existence in bustling London, it does have its merits. Philip fishes the streams with neighborhood boys and enjoys the competition that school brings while Aleda loses her prideful airs and learns how to be a friend.

The secondary characters–Fiona O’Shea and Ambrose Clay–received a good deal of “airtime” in the book and were intriguing in their own right. Fiona, once Julia’s housemaid, has now become her housekeeper and best friend. She has a secret in her past that she is running from. Ambrose Clay is a stage actor with a “despondency” problem. He takes a room in the lodging house to convalesce from his fits of melancholy, and in the process, discovers that the vicar–and everyone else in the village–want to convert him into becoming a Christian.

The first third of the story focuses on Julia’s new life and her self-discovery. What faults of her own placed her in such a precarious financial position? What kind of relationship has she built with God? But when the new vicar moves to town, the story shifts in a different direction as we see the budding of a romance for the widow of Larkspur Inn.

The strength of the story lies in the sympathetic characters and the depth of the world that the author has created. I found the plot and each of the subplots about the minor characters charming, and though they did not make me stay up all night to finish the book, I did return to it eagerly the next day.

One of the things that bothered me about this book was the Americanisms. It was very strange that an English boy would be reading a history book about the United States Civil War and, as one other reviewer pointed out, this story could have just as easily been set in the United States as in England. There was a Little Women-y feel to the book.

Another irritant was that the book was a Christian romance in the Thomas Kinkade sense of the term. Prayers are answered the next day. Everything turns out happily for everyone. There are no truly evil people. One of the themes of the book is that hardship draws one closer to God, and yet the hardship all seemed to be conveyed through a yellow glow, as if the book was one of Kinkade’s lighthouses spreading light into a world that is not actually very dark.

Despite these quibbles, I truly enjoyed the story. The Widow of Larkspur Inn is the first in a series of books set in the village of Gresham, and it is possible that I may be visiting that village again sometime in the future.