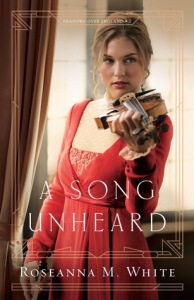 Willa Forsythe never knew her father, and her mother ran out on her when she was only six years old. Consequently, Willa Forsythe doesn’t trust anyone–and especially not the ridiculously handsome Belgian violinist Lukas de Wilde, who is crazy enough to ask her to marry him within an hour of meeting her.

The second book in the Shadows over England series, this novel tells the story of a group of refugees during the First World War who come to England after Germany occupies Belgium. Unsure if his mother and sister are still alive, Lukas must work from afar to locate them while managing his position as first violinist in a charity orchestra in Wales.

After receiving an assignment from the mysterious Mr. V., Willa leaves her band of street urchin siblings in London and heads to Wales. Lukas’ late father was a renowned cryptographer, and supposedly, Lukas has a cipher that both the British and German governments desperately want. When Lukas hears Willa play the violin, he is astounded by her talent and offers to give her lessons to further her music. Willa uses the opportunity to carry out her sleuthing. As Lukas continues to flirt, she finds herself drawn to him, but at the same time, sharply resistant to letting herself have feelings for someone who will no doubt leave her at the first opportunity. For who’s to say whether a playboy like Lukas de Wilde really loves her or will continue doing so when he finds out she’s a thief?

The initial setup for this book was a little confusing/implausible, but it was still an enjoyable romance with more than a dash of adventure thrown in. I really enjoyed the portrayal of Lukas’ sister Margot, with her curious mathematical abilities. I also liked getting to see more of Barclay–the oldest brother in the band of thieves–and his responsible shepherding of his band of siblings. Lukas was a little too pouty towards the end for me to thoroughly enjoy as a hero, but he did make up for that with many moments of wit and charm. I’m especially looking forward to reading the third book in this series as it is supposed to be Barclay’s story.