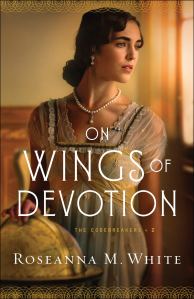 Arabelle Denler has been alone her whole life. With her mother deceased and her father gallivanting about the world on explorations, she has been forced to throw herself into the work of nursing, dreaming of someday having love, affection, and a family of her own. But when Philip Camden, the dastardly pilot about to be court-martialed, throws a spanner in the works of her matrimonial plans, Arabelle refuses to lash out or languish. Instead, she recognizes that beneath Camden’s bullying bravado, there is another soul just as starving as her own, a soul filled with humor, kindness, and constancy. Together Arabelle and Camden survive a bombing on London, outwit a Nazi assassin, and prove that devotion is a quality most desirable, a quality that they both have in spades.

Philip Camden is my favorite hero since…forever. His devil-may-care attitude and flirtatious banter is tempered by a heart loyal to both his family and his men. Plagued by the demons of guilt, he refuses to defend himself from the charges against him. Yet, even while wallowing in self-recrimination, he protects his younger sister’s honor, befriends the teenage-genius Margot in the codebreaking room (see the first book of this series!), and appoints himself as Arabelle’s protector to drive off the fortune hunters. I’ll avoid spoilers and just say that the setup for Philip meeting Arabelle is one of the most ingenious introductions in a romance that I’ve ever run across.

Arabelle is the polar opposite of what one expects in a romantic heroine. She is tall, gangly, and, in her own words, plain. Instead of being missish and taking offense at every imposition or misunderstanding, she is perpetually gracious and forgiving. Her insecurities and fears are portrayed gradually and poignantly, giving Camden opportunity to rise to the occasion to protect, complete, and cherish her.

This is one of my favorite reads of the year! Although it is part of a series and you’ll enjoy seeing the tie-ins from White’s other books, it could easily be read as a stand alone. Highly recommended.

Disclaimer: I received a complimentary copy of this title from the publisher via NetGalley. All opinions expressed in this review are my own.