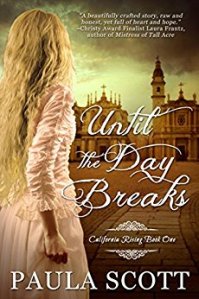 When Rachel Tyler sails around Cape Horn to join her father in California, she finds a new home simmering with tension and unease. Revolution is in the air and the question of whether California will join the United States or forge its own destiny. Eager to increase his own influence, Rachel’s father betroths her to Roman Vasquez, a Spanish-speaking Catholic landowner with a chiseled physique, a hot temper, and far more experience with women than he ought to have. As battle lines are joined, Roman spirits Rachel away to his family’s home for protection, and Rachel must decide whether this  passionate caballero, who is unlike any man she has ever known, is someone she can come to love.

I am conflicted about this book. The characters were well-drawn, the pacing was pitch-perfect, and the historical setting was fascinating. I have never read much about California pre-statehood, and the passion of the Californios for the liberty of their home territory was interesting. Several reviews that I read compared this story to The Mark of Zorro, and the comparison seems apt.

But on the other hand, there was also a lot of violence and sensuality in this book (it seems like every other chapter has someone being half-naked or Roman attempting to get Rachel to sleep with him). While I appreciated the author’s attempts to show how the Gospel changes everything, the way in which Roman “accepted Jesus as His Savior” seemed more Billy Graham-style than nineteenth century Spurgeon/Moody-style. I also had reservations about Rachel marrying someone who had done the things Roman did in the recent past–while the reformed rake works nicely for a romantic plot, it seems a little less desirable in real life.

Overall, this was an engaging read, but I would be careful about who I recommend it to instead of recommending it indiscriminately.