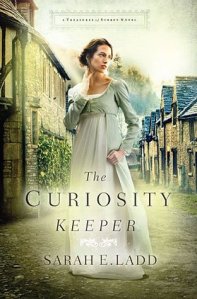 This book was a decent Regency romance although not particularly memorable. I received it for my birthday a year ago, and as items sometimes do in our house, it promptly disappeared. One of the kids found it buried under my dresser last week, and I was excited to have something to read during Christmas break from school.

Camille is the daughter of a shopkeeper in London. She manages the accounts and the storefront while her father takes mysterious trips to secure collectibles for his business. Her mother has mysteriously disappeared to Portugal several years ago, leaving a bitterness in Camille that will not go away.

Jonathan is a village apothecary from a noble family. When his brother dies, he is expected to be the new heir, but he would rather continue on with his humble profession than prepare to be lord of the manor. When his father finds that his most valuable collectible, a ruby called The Bevoy, has been stolen, he requires Jonathan to go to London and try to retrieve it. Jonathan’s investigations put him on the trail of a curiosity shop’s owner, and in the process, he rescues the shopkeeper’s daughter from assault and tries to help her start a new life away from her abusive father.

I enjoyed the descriptions of the “curiosities” in the home of Jonathan’s father and the role that obsession plays in the life of a collector. The romance was described well, but I didn’t feel particularly drawn toward either main character. The conflict that Camille and Jonathan each had with their parents added dimension to their characters but also seemed a little contrived. I’ve enjoyed two of Sarah Ladd’s other books, but this one just wasn’t one of my favorites.