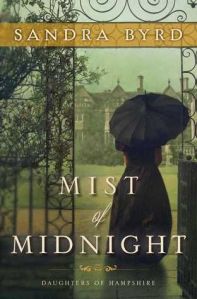 I first fell in love with Sandra Byrd’s novels with her ladies-in-waiting books set during the Tudor Era. I was thrilled to learn that she would be releasing a novel of romantic suspense set during the Victorian Era, and now having read it, I must say that Mist of Midnight did not disappoint.

Rebecca Ravenshaw returns to England after her missionary parents were massacred during an uprising in India. When she arrives, she discovers that another young woman had come before her, deceitfully claiming the Ravenshaw inheritance and family estate. In the intervening months before Rebecca’s return, this young woman died, and Captain Luke Whitfield, a dashing Hussar and distant relative, is now in possession of the estate.

Suspected of being an imposter herself, Rebecca must prove her identity to a doubtful solicitor, to hostile servants, and to the new heir, Captain Whitfield. She finds herself falling prey to Captain Whitfield’s good looks and charm, but when she begins to suspect that the previous claimant died not by suicide but by murder, she has to decide whether the captain is trustworthy or treacherous.

I devoured this book, starting it in the afternoon of the day it arrived in the mail and finishing it that evening. The historical detail and mysterious atmosphere were impeccably done. The characters, especially the first-person narrator Rebecca, were well-fleshed out and believable. One thing I like about Byrd’s prose is that instead of telling you everything her main character is thinking or feeling, she lets you read between the lines. She also uses clever word play and double meanings in conversations between the characters.

Besides the heroine and her love interest, I also particularly enjoyed the mercenary French maid. There was one “twist” with a secondary character at the very end of the book that jolted me out of the story–I think I would have preferred the story without it, but even so, the book was a tremendously satisfying read. The book could be classified as Christian fiction, but just like in her Tudor Era books, Byrd manages to portray authentic Christian characters and convey redemptive Christian messages without sacrificing her craft or undermining her storyline–Christian fiction at its best!

Mist of Midnight is the first in a series, and I am very much looking forward to the next books in Daughters of Hampshire.

***I received a free copy of this book from the publisher in exchange for an honest review.***